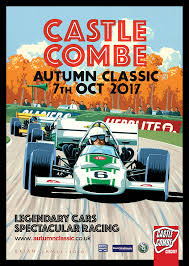 This Saturday (7th October) there is a treat in store for Classic Racing Car Enthusiasts. The Castle Combe Autumn Classic is one of our favourite events as it provides truly accessible Historic Motorsport excitement. Here you will see many of the marques and models of classic car that appear at Goodwood Revival, but without the crowds.

Castle Combe Circuit opened in 1950, and over the next few years, the circuit attracted star names including Stirling Moss, Mike Hawthorn, Roy Salvadori and John Surtees. One of the country’s fastest tracks, the racing is always exhilarating and challenging for cars and drivers alike, and to see period classic cars being driven hard on a fast track is something very special indeed. Given the huge value, both historic and financial, of the racing cars on the track, the spectacle is breathtaking.

Expect to see some of the most glamorous and spectacular racing cars still in Historic competition today, such as an original Jaguar E-Type Lightweight, Ferrari 250 GT Berlinettas, Afla Romeo Giulia TZ2s, competition AC Cobras as well as some humbler, but none the less interesting and evocative survivors from an amazing time for motor racing.

The day’s programme includes a race for pre-66 Jaguars, another for Historic Aston Martins and 2 races featuring 1960’s GTs and Sports cars and 1950’s ‘inter-marque’ Sports cars.  Throw in grids for Vintage racers, and another for open-wheel racing cars and there’s something for everyone. The full programme can be found at autumnclassic/races/ – At £20.00 or so admission is very reasonable too!

For a Classic Car fan, though, the huge other advantage of this meeting is that the ticket price includes access to the paddock. Again, this is in the spirit of the era when going to a motor racing meeting at the weekend was a popular pastime, and the fans would have been able to get close to both cars and drivers before and after races.

We’re very much forward to going along!